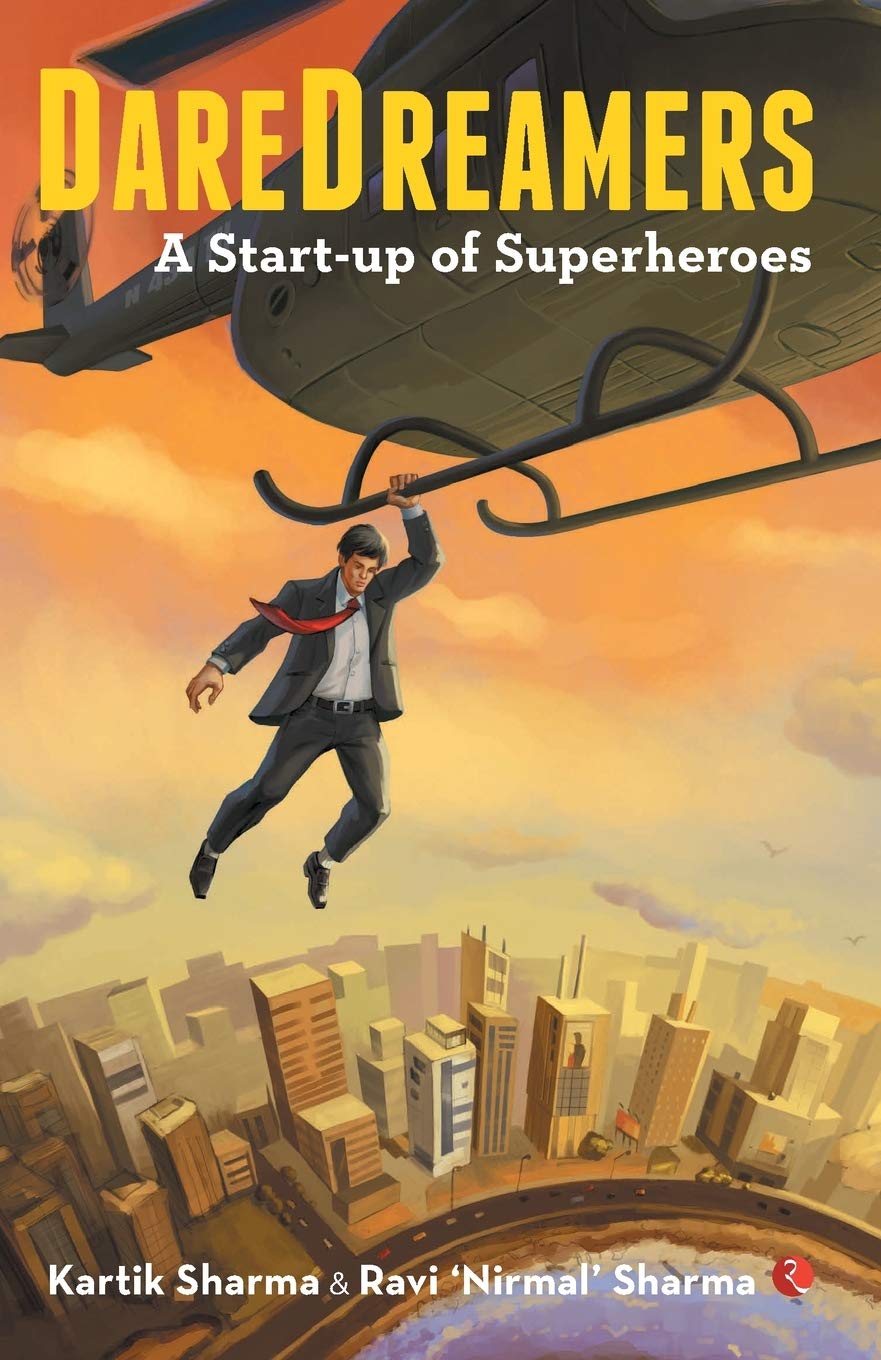 ” India’s first start-up of superheroes with a mission of saving lives is here to motivate and entertain readers. Rasiq is riding the highs of life thanks to his successes as an investment banker. But his arrogance soon gets the better of him and he ends up losing everything he holds dear. Managing to salvage only his grit from the wreckage, Rasiq reboots his life and teams up with five uniquely talented superheroes to start a rescue venture DareDreamers. These superheroes Nick: a crazy inventor; Halka: an inhumanly strong man; Arjun: a champion shooter; Natasha: a Bollywood stunt-double; Dr. Vyom, a medical Sherlock Holmes; and, of course, Rasiq: the mastermind combine their unique talents to deliver spectacular rescue operations. Their skyrocketing success, however, comes at a price – an enemy hell bent on tearing down their fame and reputation. Will DareDreamers defeat its wily adversary? Or will it become yet another failed start-up? Treachery, action and adventure come alive to make DareDreamers a page-turner.

If you like novels in the Action, adventure & thrillers categories and genre from authors like Dan Brown, Lee Child, Jeffrey Archer & Michael Crichton, then you will love this novel. This highly motivating, action packed novel published by Rupa Publications will encourage you to follow your passion and do things you love. It will inspire you to pursue your dreams and lead a fulfilling life. Instead of living for the sake of others and the society while doing jobs you do not like, you will realize the value only you as an empowered and gifted individual can create with the one big talent that exists in you and which you are neglecting. “

What was the idea behind the novel?

It takes under 30 minutes for a Pizza to arrive in India but an ambulance or a firefighter takes hours. And many times with fatal results. You can order anything from an app and get it delivered at home. Yet when it comes to saving lives, there is no such app or even an option.

In times when there is a start-up boom throughout the world, there’s a very real need of one that can save lives. In real time, the ‘measure by your stopwatch’ time. This prompted us to write the novel on saving lives.

What’s the premise of Superheroes you have created

People don’t have to have the special powers of a Spiderman or Superman to save the world. The one great quality they have is enough to turn them into superheroes. Everyday superheroes are there for us to see in the world we live in. The army jawan who saves the lives of hundreds of people with bravery, his special quality. The Swimmer who rescues people about to drown.

The pilot who uses his presence of mind to land a plane without the front landing gear. These and many more cases appear in the news, regularly. Only one quality drives these life-saving missions. Belief in oneself. And that is all it takes to turn a common man into a real life Superhero. The novel, DAREDREAMERS – A Start-up of Superheroes, inspires readers to connect to their special quality or gift only they have. It is what sets them apart from the rest. Defines them. Can transform them into Superheroes. With this basic thought, Rasiq the protagonist of the novel creates a team of people each with a unique gift. He quits a high paying job to do something he loves. To create value. Much more than the individual capacities of the team members who form the start-up.

What kind of Rescue Missions you have covered in this novel?

The rescue missions in the novel are not the usual, everyday situations. They are innovative and driven by the teams’ self-belief, technology, and innovation.

They are not the out of this world kind of fantasies either, but real possibilities. Each situation needs special action which is firmly planted in the laws of science and have been backed with research. They are informative as well as entertaining.

You have also created a DareDreamer anthem. What prompted you to do so?

We wanted a nation of billion Indians to Dare to dream. And turn the dreams into a reality. India has had enough of daydreamers. It now needs a billion DareDreamers. To motivate the youth we released the DareDreamer anthem. To inspire millennials to script India’s next success story. It is a song video played by a band of young and talented artists. They have made it intense with their creativity. This is the first time such an effort by any author has been initiated. A refreshing shift from the self-adulatory approach of most authors. The song is available on YouTube.

You have challenged the age old fable of the Hare & the Tortoise in the prologue. Why?

Yesterday’s fables are not relevant in today’s world. The work harder culture was good in the industrial times. The only thing required from individuals was punctuality and hard work on machines at factories. Today’s world has taken away much of the hard work and the shift has happened to smart work. So the fable that lauded the tortoise now has to focus on the Hare. He did not believe in running the race for the jungle. So what plans did he have in mind when he refused to participate in the rat race of the jungle. Today thousands of youths are dropping out of the rat race like that hare. Their parents and colleagues get alarmed. Yet the desire to pursue dreams and what lies beyond the horizon is beckoning many people to own start-ups and they are succeeding at what they do.

Wherever there is a superhero, people automatically assume it is inspired by the Hollywood. Or comics and films. But our novel is actually one that features real-life superheroes that are everywhere around us. In this very world, we live in. They are not citizens from a different planet. They do not have any superpower. What they do doesn’t need a suspension of belief, physical laws or logic. They are driven by the one exceptional talent they have. That quality is there in you, me, everyone. We just have to connect with it, believe in it and it has the power of turning us, ordinary human beings of planet earth into superheroes.

Who all should read this book?